The graphics in EQOA were downright awful compared to what you can get in today’s world. With this said, after playing several MMO’s since EQOA, I can honestly say that no game was able to design an environmental experience on the level of PS2’s Tunaria. I have no idea if it was truly that great, personal bias, or the PS2 format, allowing the player to look at their surroundings so easily. But take a look at this photo:

This is straight from Google. As simple as this scene is, there was something relaxing/great about the tree, rock, grass, cloud, and sky design that seems not to be tied up in the overly-complex environments of today’s MMO’s. Modern day MMO’s love big cities, detailed terrains, and fighting systems that require 100% of the player’s attention. Lost in that is the simplicity of open fields, forest, and swamps. Lost in that is the ability for the player to take in their environment during a fight. While half of the game was the community, the other half was Tunaria’s topographical design. Props to SOE for nailing the design of its terrain on the head. 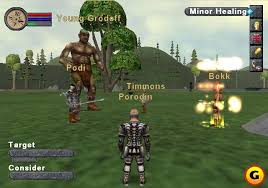 EQOA blogger
View all posts by Stonee →
This entry was posted in Uncategorized. Bookmark the permalink.